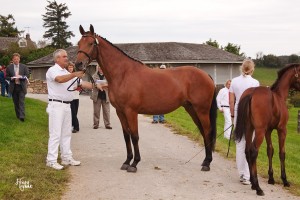 Aloha S.E., is by Sir Sinclair — a stallion well known for passing on his fabulous temperament and quality movement. Just this past year, Sir Sinclair was awarded Keur status by the KWPN in Holland, based on the strong success of his progeny.  Aloha’s dam, Kadence – by Wanroij, is one of a small handful of mares in the US who have earned Preferant Status with the KWPN.

Aloha S.E. is a fabulous mare, and proven producer. In 2010, she was North American Champion of the DG Bar Cup for 5 Year Old Dressage Horses and has already had 2 Champion foals at their Keurings in her short breeding career.  Aloha is also approved in the Main Mare Book – Oldenburg Horse Breeders Society (GOV) 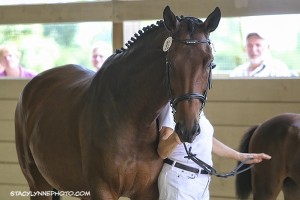 Dateline S.E. is a tall, powerful mare by Hotline, a fantastic stallion who has proven himself competitively at Grand Prix as well having had 9 approved sons and countless offspring successfully winning in the show ring. He is well known to pass on size and great temperament under saddle.  Dateline herself stems from the famed Bria mareline in Holland.   Her great aunt was none other than the famous Olympic Barbria — competing successfully in the 1996 Olympics in Atlanta and helping to secure Team Silver for the Dutch.  Dateline S.E. is also approved in the Main Mare Book – Oldenburg Horse Breeders Society (GOV)

Diementa CL is a fantastic moving mare with a super kind disposition.  She is by the famous Dutch Stallion Tuschinski, who is by none less than the world famous Krack C… a serious grand prix competitor at international level with Anky van Grunsven. Tuschinki scored super-high scores at the Dutch KWPN stallion selection and was the sire of the Dutch National Foal Champion in 2005 and 2006, along with siring the renowned stallion, Tailormade Temptation.  Diementa’s damsire, Rousseau, needs no mention… having been the flagship stallion for Hassler Dressage.

Diementa had a fantastic undersaddle career before joining us as a broodmare.  In 2012, she competed at the Pavo Cup in Holland, earning a respectable place in the top 20 before being imported to the US.  We are looking forward to having many foals from this lovely mare. 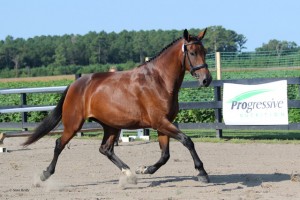 Karisma S.E. came to us as a weanling from Siegi Belz-Fry and Stall Europa.  Like all of Stall Europa horses, Karisma is of top notch quality.  She has such a powerful way of moving, with a super carrying hind end and the absolute best disposition.  She took everything in stride at her keuring, easily earning her Ster Predicate, provisional Keur.  Karisma is by Negro out of a Jazz mare.  This combination has proven to be super successful cross in Holland, and I can certainly see why.  Through both Negro as her sire, and Wanroij on her dam’s side, Karisma also carries a strong amount of Gelders in her blood, which makes her a versatile, athletic mare which she will undoubtedly pass onto her offspring.   She had her first foal in 2019.  Not only was the foal super, but Karisma was a super mother in all respects!